10:35am- 12:45pm:
Museum Nabukadnezara
Museum Nabukadnezar is near ancient babylon and as well as relics has Mesopotamian clothes. The evidence of these civilizations' clothing remains on sculptures, pottery, and in writings left on tablets and royal tombs. Men wore skirt-like clothes, tied around the waist. Women wore garments that covered them from the left shoulder to the ankles, leaving their right arms and shoulders uncovered. Most of their clothing used goats wool as a material. There are also many relics about the Babylonians so I recommend wondering around the whole museum as well as the clothing exhibit. 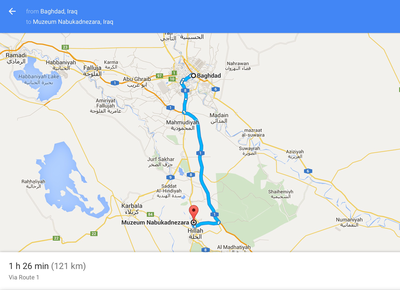 12:50pm- 4:00pm
The Great Ziggurat of Ur
In the centre of each town, was the Ziggurat. The ancient Sumerians, believed their gods lived in the sky so you needed to get closer to the gods so they would hear you better. They we're the tallest building in the town. Ziggurats continued being built even when the Babylonians And Assyrians took over the south. Religious ceremonies were held on top of the Ziggurat. Each day, people would leave offerings like food, cloth, and wine on the steps of the ziggurat for the gods. The priests would collect and use these gifts since they were representatives of the gods on earth. I will be taking you to the Great Ziggurat of Ur, the best preserved ziggurat in Iraq. The ziggurat is located m southwest from Nasiriyah, Iraq. 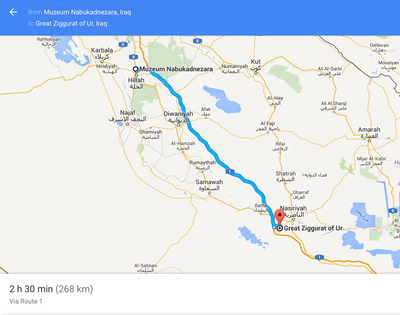 4:15pm- 4:45pm
Uruk, Iraq
Uruk was one of the first major cities in the history of the world. It was located in southern Mesopotamia along the banks of the Euphrates River and was the center of the Sumerian civilization. Uruk was able to grow so large because of advanced farming and irrigation techniques. The most famous king of Uruk was Gilgamesh, (who was later turned into the a mythical hero through the tales in the Epic of Gilgamesh), who built a Great Wall in Uruk. This is another example of public works in ancient Mesopotamia. Today Uruk is located North West of Nassiriyah. 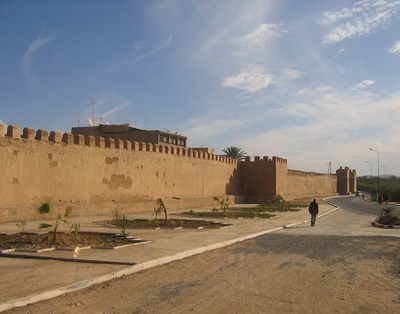 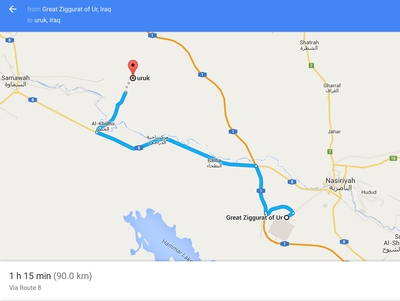